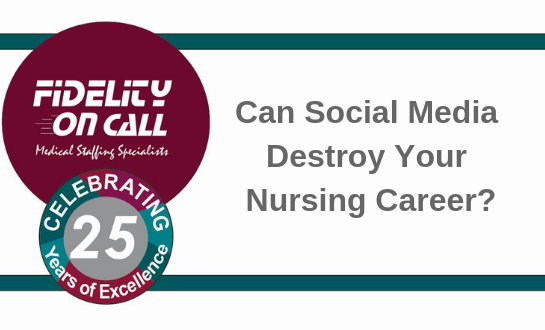 There have been many examples of nurses who were disciplined because of not following their company policies. We recently read an article where a registered nurse posted comments on her Facebook and Twitter pages criticizing the end-of-life care her grandfather received at a healthcare facility. She went on to say that she felt the staff was incompetent, questioned their compassion and whether they even cared about their residents/patient. She then went a step further and identified the facility.

She said, “As an RN and avid healthcare advocate myself, I just HAVE to speak up!” She then linked her post and comments to other pages and, of course, all of the discussion became public.

Needless to say, the facility filed a complaint against the nurse. After a very thorough investigation, it was determined that she:

The investigation revealed that the nurse had only been in the facility a few times and she received her communication from family members who reported to her.

She never discussed any concerns she had about her grandfather’s care directly with the facility. Additionally, prior to her post, she had only made one minor complaint about the facility and it related to a hand sanitizer.

After determining that the comments harmed the reputation of the nursing staff at the facility and undermined the public confidence in them, this nurse was disciplined.

In addition to a self-reflective essay, on-line education on ethics, a fine of $1,000 she had to pay $25,000 toward the costs of the proceedings (the actual costs were six times this much). Although the nurse appealed the decision, the ultimate finding was upheld.

This is just one example. We could, truthfully, go on and on about employee posts and the lack of restraint when hitting the internet.

With Social Media, it is always best to err on the side of caution

Additionally, if a facilities’ staff member is upset over something and makes a post on social media, never comment on their post. It puts you directly in the line of fire.

Even social media posts that promise to “go away” in a matter of minutes or hours can hang around forever. What keeps someone from seeing it and snapping an image?

We think being aware of the pitfalls, using good common sense, and following a Social Media policy make your professional career much more enjoyable and certainly more drama free. It could even save you thousands of dollars!