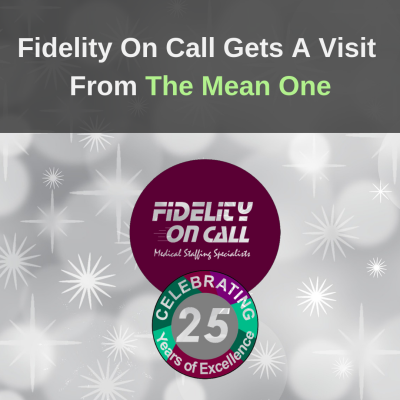 Everyone at Fidelity liked Christmas a lot
But the Grinch who showed up surely did NOT.

The Grinch hated Christmas! The whole Christmas season
Don’t ask us why . . . we don’t know the reason.

It could be his head wasn’t screwed on just right
Or maybe his shoes were really quite tight.

But whatever it was his head or his shoes
He was determined to give us Christmastime blues.

With his heart as cold, as cold as could be
He stormed through our office to steal all our glee.

He started with Jill since she was new to the team
He thought he could make her leave with a scream.

But she wasn’t the pushover he thought she would be,
“I love what we do here,” she said happily.

“No Grinch can upset me or steal all my joy,
You need to keep moving, I won’t be your toy.”

The Grinch didn’t like that – it made him quite mad.
The spirit in the office just couldn’t be glad . . .

But how could he stop it? What could he do?
He just couldn’t take it. He started to stew.

And while he was stewing he had a grand thought
I’ll change some nurse files I’ll never get caught.

So he went to the cabinets to find the nurse files
And started to throw them in big, messy piles

“What are you doing?” Erin said to the Grinch
“I know you want trouble. You can’t make me wince.”

“I’ve been here a while; I know the whole system”
And, then she surprised him and thoughtfully hugged him.

He must shake that feeling. That weird, funny feeling
That started his head really quite reeling

“I know what to do”, the Grinch said with a chuckle
Their Christmastime joy will now surely buckle!

What was the reason? He failed to see.
Why was she happy? What could it be?

Sara just laughed and said to the Grinch
“Nothing you do could make me flinch.”

You’re that way because you’re sad as can be
You’re lonely and sad and that shouldn’t be.

I know we can help you this Christmastime season
We’d love to do that – we don’t need a reason.”

The Grinch wasn’t sure. Was she really that nice?
He thought and he thought . . . he thought more than twice

How could it be this happiness and glee
was spreading, yes spreading he thought thoughtfully

Maybe Jenny and Kellie and David and Pat
Would be just as happy. Now what about that?

What would he do? Now where could he go?
A weird feeling was starting now . . . down at his toes.

From his toes to his nose he started to glow
And, then his hard heart it started to grow.

“Mr Grinch we all love you. We are glad that you’re here
We know things can be hard, this time of year.”

And he knew that Christmas was more than just things
It was truly amazing. His heart started to sing.

And as he was singing he started to beam,
Because now he was part of Fidelity’s team.