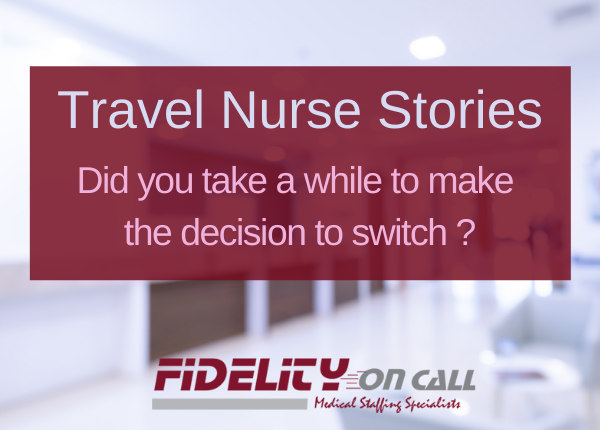 We asked some of the members of our elite team of travel nurses if it took them a while to make the decision to switch to travel nursing, and if so, what kept them from making the move sooner?

Did you take a while to make the decision to switch to travel nursing? What kept you from making the move earlier? In this story, Clayton says the comfort of familiarity kept him from making the switch, but a situation where he didn’t get his vacation earned, prompted him to make a change.

In this story, Holly says she waited because she thought it would be too hard to jump in. But she’s learned through many contracts, that’s not the case.

In this story, Sue says she’d left the hospital to work in a group home, but missed the action. Traveling allows her to help people when they’re at their most vulnerable.

In this story, Tyler says the fear of change and questions about how it would impact his family held him back, but after several conversations with Kellie, he felt confident in deciding to switch.

In this story, Charis says she asked a travel nurse about the ins and outs of traveling and jumped right in!